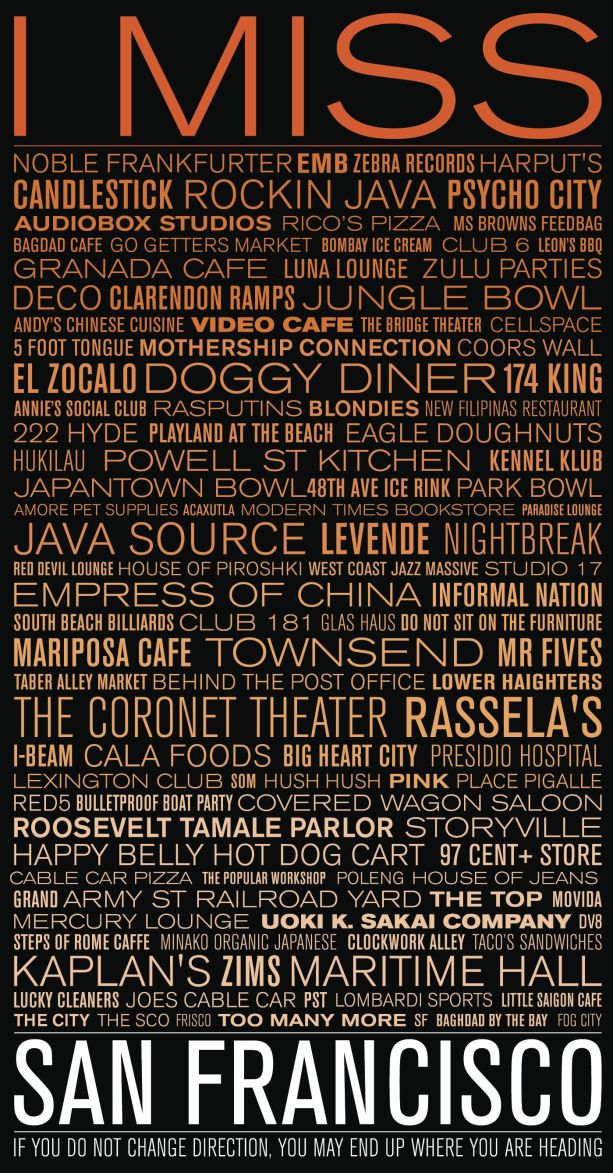 Everyday when I wake up and walk to work, or to my son’s school, or to the park, something is closed for good. I know that it’s a regular part of the life of a city, to have businesses opening, closing, being replaced, etc., but there is something different happening now. Every single time a business closes in San Francisco, it’s being replaced by a business that is unaffordable to the general population, very often owned by someone outside of the city, and most often taking the place of business that was a useful part of the community. Having the occasional wine bar, high end boutique, artisan cafe, and top tier restaurant is a wonderful thing. But having a glut of these businesses at the expense of markets, laundromats, breakfast cafes and musical venues that helped make the city what it was, is a disaster.

It’s part of a larger conversation about gentrification, displacement, and replacement that is taking part all over the Bay Area, and the country, but we seem to have a hyperactive version of these things here. Not all the businesses or locations on this design have been part of this process, but it is what prompted it. In fact, I had to redesign it a few times over the last few months as more spots were shuttered. I just had to call it one day and say “it’s going to print”. Within the next seven days, three of my favorite food spots, each with a history of more than 20 years each, closed its doors for good. Since then, I’ve added at least 6 more. That is hyperactive replacement.

“That is hyperactive replacement.”

Some places listed on the tee closed decades ago, but were a part of a larger story of SF, one that I was too young to be a part of, but the stories of which are passed down. Some of the spots were unsanctioned meeting places, the names of particular parties, and places of interest that met a natural end. I will update again this year. I will add all those other places that were removed from my neighborhood recently, due to rental increases built from the entitled outdoor-mall atmosphere that is crawling across the city. It isn’t an old, foggy, and romanticized version of San Francisco we are missing, it IS San Francisco. It’s being replaced plot by plot and flat by flat. Change is good, but erasing and replacing is dangerous. People’s lives and livelihoods are being erased and replaced daily in a concerted effort to create spaces more accommodating to the young rich.

There is no balance here anymore, and it makes me miss San Francisco.